A customer tried to create an Org VDC network which connected to an edge Gateway. The following error message appeared:

All Interfaces of the edge gateway are in use 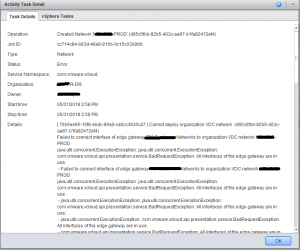 The resolution is to use an extra Edge gateway or use another virtual firewall which has less of an interface llimitation, such as the Palo Alto.