We have a Veeam Repository Server  (6.5.0.106) located in Datacentre 1. We have a 1Gb link to Datacentre 2 which houses a Veeam Proxy server. The Veeam Repository Server calls all the jobs both locally in DC1 and in DC2 remotely. All backup data is stored locally – via pRDMs – to their DC (so there is no storage traffic going over the 1Gb link). Hosts involved are all ESXi 5.0 and the backup mode is "Virtual Appliance".

Here is an example of the error.

I suspected it might not be using the correct Veeam Proxy so I forced the job to use the correct one (although it was set to Automatic it looked liked it was trying the DC1 Veeam proxy before DC2). The Veeam Proxy and Veeam Repository Server were both rebooted and size was recalculated.

Un-tick the "Use Multiple TCP/IP connections per job" which can be found in MENU -> Traffic Throttling. 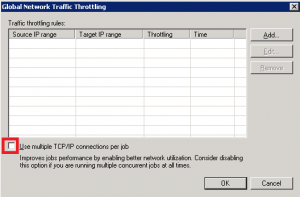 2) The Veeam support team thought it might have been the API timing out (as a lot of the VMs were failing after 20 mins) so we changed from [hotadd] to [nbd] mode.

To do this you select Backup Infrastructure -> Backup Proxies ->  Right click the required Veeam Proxy (172.17.19.5 in my case) -> Properties.  Then select the Transport Mode by clicking Choose and then the required mode. In my case I chose Network for the test. 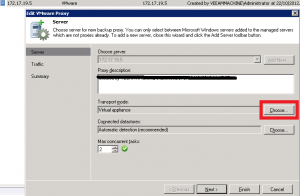 3) I then created a brand new job (although leaving out a quite large VM of about 1TB). It *almost* worked (see below): 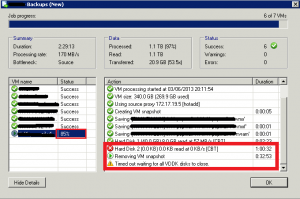 I wasn't certain it was completely working so the following evening I ran the job again (this time adding the large VM I had omitted previously).

It appears a patch fixed the issue in the end.  Unfortunately it took 7 days to locate the problem so I guess I will start there in the future !!